'It's a Gas' - a Cambridge Science Festival lecture

On Monday 19 March, a group of 20 Year 5 pupils had the privilege of attending a lecture delivered by Dr Peter Wothers of the Cambridge University Chemistry Department. The event, held in one of department’s large lecture theatres, was titled ‘It’s a Gas’ and was a Cambridge Science Festival event. Dr Wothers has become something of a legend for his exciting and literally explosive experiments, vividly bringing Chemistry to life for audiences of all ages.

This was no exception and Dr Wothers wasted no time in starting to show some simple and memorable demonstrations of the powerful reality of the air around us. He showed how air exerts enormous pressure, especially on objects from which the air has been sucked out with a vacuum pump and how it can be weighed on a balance. These were themes we had tackled in our ‘Gases Around Us’ topic, and the pupils were fascinated to see what more they could learn from the high-tech apparatus on display.

The Year 5 pupils had already appreciated the explosive power of gases from our outdoor classroom lesson last term, but Dr Wothers took this to a new level, in his own inimitable style. A digestive biscuit and some rice crispies were doused with liquid oxygen and then ignited, releasing staggering amounts of energy in the form of huge flames. This was a dramatic illustration of the energy locked up in carbohydrates, which we learned about in our ‘Keeping Healthy’ topic. The lecture finished, as you might expect, with a bang, as an enormous red balloon filled with hydrogen was lit, creating a vast explosive fireball, whose heat we could feel from our seats!

The demonstrations were all backed up by rigorous Science, and the children were introduced to a number of names for chemical elements and compounds and some simple word equations for the reactions shown. All in all, a great way to enrich many of the themes we have been exploring in Science at school, and hopefully an inspiration to further explore the wider world of science and technology. 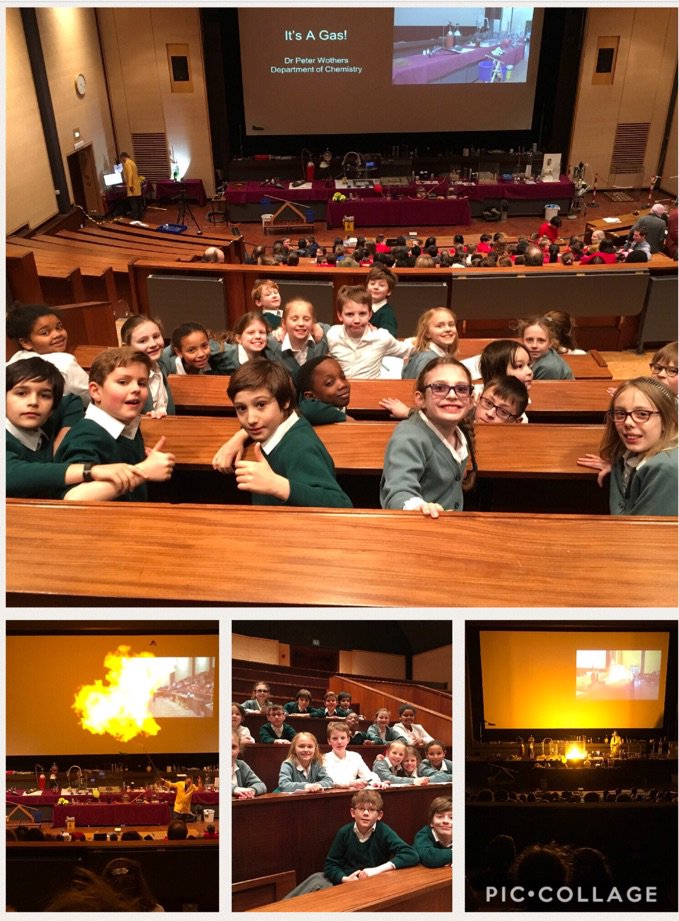