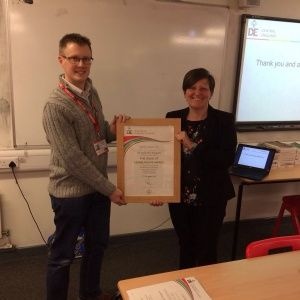 December 2017 saw the Stephen Perse Foundation become a Directly Licensed Centre (DLC) for the Duke of Edinburgh's Award with Mark Woodward as Award Manager. This means that we are completely responsible for the running of the program in the school (rather than working with Cambridge County Council) and report directly to the Central Region office. This move will streamline the administration of the Award at the Foundation and will also give us greater flexibility in developing our program, to the students' benefit.

We have also entered into a closer relationship with the Exploration Society, who have been runnning our expeditions for the last few years. We are working together to develop a more exciting and challenging range of acitivities for our students as the Exploration Society take over the full running of the Expedition section.

Nationally the Duke of Edinburgh's Award goes from strength to strength. The Diamond Anniversary a year ago raised the profile of the Award and also raised a large sum of money that is now being used to support the running of the program in more centres, with students who had not been able to access it before. At the Stephen Perse Foundation we recognise the value that the Award brings in developing character and resilience in our students, through their long term commitment to various activities and the outdoor pursuits that the Award is well known for.

A word from Mark Woodward on his new role:

"As Award Manager I will be writing to parents of the relevant year groups over the coming weeks to explain the changes to the three levels of the Award in the school, how students will sign up and how they will be supported in completing their program. Having been involved last year in running some of the administration of the Award, the full Manager role is one that I am familiar with having held this position at my previous school and in my ten years of working with the Duke of Edinburgh's Award. We have already signed up 12 students in the L6 to take part in Gold and I am hopeful to build on the excellent numbers that have been doing Bronze and Silver in the Senior School over the last two years. One of my priorities will be to raise the profile of the scheme and also recognise the achievements of our students more, so do look for more news articles on their activity in newsletters and Twitter, including an article on a recent trip to the Cambridge University Real Tennis Club by some of our year 10 students to a masterclass in the presence of HRH The Earl of Wessex which you can read about briefly on the official website of the Royal Family."

If you have any questions about the Duke of Edinburgh's Award, either what it entails or how students can take part, or if your son or daughter is already involved, then please do contact Mark.