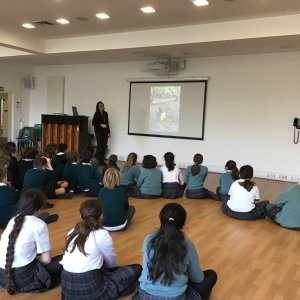 On Friday 28 February, we had the privilege of welcoming Professor Rebecca Kilner to the Fitzwilliam Building to deliver a talk to our Year 6 pupils on her research into the evolution of burying beetles. Rebecca is Professor of Evolutionary Biology at the University of Cambridge and Director of the Zoology Museum, as well as one of our Junior School parents.

First of all, the pupils were treated to a fascinating wealth of detail about evolution, which we have been studying this term in Biology, as illustrated by the rich variety of the museum’s collections, including the voyage of Charles Darwin, the extinction of the Dodo and the classic story of the peppered moth before and after the industrial revolution.

Rebecca then discussed her own research into burying beetles, at sites around southern Cambridgeshire. These insects act as undertakers of the natural world, stripping down and burying the corpses of dead animals, as illustrated by some amazing time lapse video footage of the remains of a mouse being rapidly broken down. The beetles use these animal fragments to feed their young, and the children were fascinated by some of the ‘yucky’ details!

This provided a unique opportunity to experience the world of real scientific research in one of the most profound areas of Biology. Perhaps the most remarkable thing was that work like this represents an actual experiment in evolution, often thought of as an area of research where we only observe the effects of evolutionary change over millions of years.

We are always keen to encourage our young scientists to develop their use of the scientific method, and this was a lesson that couldn’t be bettered! Rebecca also made an intriguing and very timely link to history, in telling us that her beetles are found in tiny ‘islands’ of woodland, left over from the great primordial forest that once coated this part of the country, whose destruction was chronicled in the Domesday Book of 1086.

Rebecca’s talk clearly fired the imagination of her young audience, as shown by the huge number of often very detailed and well-thought-out questions they asked. Much food for thought then, as we carry on with our evolutionary studies in Biology, and we hope to have a go at some fieldwork on burying beetles in the near future.

We are extremely grateful to Rebecca for taking time out of her busy schedule to come and inspire our pupils, giving them an insight into the world of real scientific research and the opportunities offered by a scientific career, where both women and men can now make major contributions.