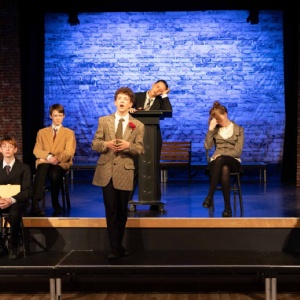 Based on the traditional story ‘The Pied Piper of Hamelin’, our Year 9 production is a cautionary tale that feels quite relevant to a contemporary audience.

In this version, the original rats are replaced by ‘Ratz’ - a gang of loud, unruly teenage delinquents who are causing trouble in the once peaceful town of Hamelin. When a mysterious Stranger promises to rid the town of the Ratz for a small fee, the Mayor and Town Councillors think they are getting a bargain. However, when they decide to not pay the bill once the Ratz have been removed, it is the ordinary people of Hamelin who must pay the ultimate price for their greed and corruption.

Our fabulous Year 9 cast have worked so hard on this production. Whilst many of them took part in last year’s Year 8 filmed performance of ‘Beauty and the Beast’, ‘The Ratz’ marks their first theatre performance in front of a live audience since joining the senior school.

The dance and movement sequences were choreographed by the students themselves: particular mention must go to Luqa who helped to choreograph the Ratz’s street dance. The production also features live music, performed by Raye as The Stranger.