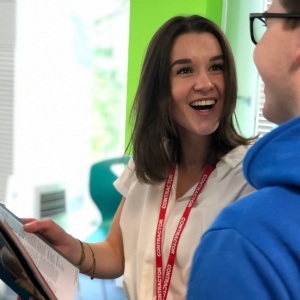 Students from the Stephen Perse 6th Form College, CCSS and IVC enjoyed a guidance day designed to get them thinking in more detail about higher education.

On Tuesday 5 March, all the Year 12 students from the Stephen Perse 6th Form College were joined by their colleagues from Cambridge Centre for Sixth-form Studies (CCSS) and Impington Village College (IVC) for a Higher Education guidance day and evening event.

The day began with a talk about degree apprenticeships, giving the students an opportunity to consider the many different options available to them once they leave sixth form. This talk was given by Rachel Rhodes from Nestlé and Charlynn Koranteng from KPMG. They emphasised the financial and employability incentives that the highly competitive degree apprenticeship programs offer, and how they allow students to work and gain a degree at the same time.

The second talk focused on independent universities and two year degree programs. This was given by Danielle Robertson, from the University of Buckingham. Again, this opened the students eyes to more options than just the traditional three year degree options.

The afternoon sessions focused more primarily on the standard UCAS application process considering what makes a competitive application whilst also discussing how to go about choosing the university that is right for you. These talks were given by Sian Griffiths from the University of Nottingham, and Mike Nicholson, Director of Student Recruitment and Admissions at the University of Bath. City versus campus, catered versus self-catered, sports clubs and societies, were just some of the options posed for students to consider when picking which universities to apply for, as well as academics and course.

Mike Nicholson also spoke on the long term aims of going to university and how best to prepare for university. This included writing personal statements and students were given some tips on how best to write these to make their applications stand out as much as possible. In addition, students were asked to consider the practicalities of how they may fare in their first year at university, questioning their knowledge of many fundamental skills, such as ‘can you work a washing machine?’!

The day was broken up with two breakout sessions where students had the chance to mingle and talk with a range of professionals from different career paths, as well as representatives of various universities and degree subjects.This enabled the students to address any queries they had and to delve deeper into the universities/degrees/careers that interested them most. Whilst some students had a clearer idea of the progression path they wish to follow, others used the opportunity to ask questions about all of the options that are available to them. The subjects and companies represented included Abcam Ltd., studying overseas, studying law, studying history, studying engineering, Art Foundation courses, medical entrepreneurship, biological engineering, studying languages, the University of Surrey and the University of Newcastle.

The day program was followed by an evening event, mainly aimed at parents. The speakers at this event were Mike Nicholson, Sian Griffiths, Jacqueline Tasioulas, Senior Tutor and Lecturer in English at Clare College, Cambridge, and Sara Wingate Gray, Senior Teaching Fellow at UCL. The speakers were able to answer parent questions about the university application and admissions process, as well as questions regarding the changing face of higher education and the future of higher education.

Overall, both students and parents came away from the event much clearer about the higher education options available, and what the next steps are in pursuing these. Many important questions were answered and everyone came away more confident that they could approach higher education applications in a more proactive way.

Check out the photos here.