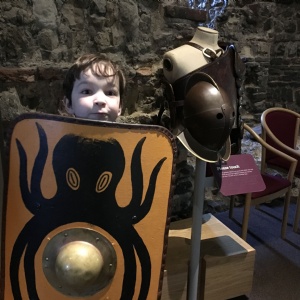 To support their topic on the Romans, Year 4 visited Colchester Castle Museum on 1

During the course of the day, the pupils had the opportunity to engage with interactive museum exhibits in the galleries. The simulated chariot race proved to be very popular. The children also worked together to complete the challenge of building a Celtic roundhouse, a Roman villa and identifying and sorting Roman artefacts.

The castle itself is built on the site of the Roman Temple of Claudius. The children walked down the many steps into the vaults to learn more about Boudicca’s revolt against the Romans and the burning of the Temple by the Celts.

This was a fascinating educational trip and, in their own words, here is what the Year 4 pupils thought.

I liked it when I put on the armour because I felt secure and Roman. I imagined that I was in battle. What I enjoyed most was building the Roman house, it looked very easy but it wasn't. The problem was we missed a block but it was all very fun! Loic

The museum was very realistic. My favourite task in particular was constructing the Celtic roundhouse because I felt that I was actually in a house, 2000 years ago. I also liked the chariot horse game. It was very good and entertaining. Martha

I liked the chariot racing because it was so realistic and fun. I also enjoyed counting the steps going down into the vaults. Each step represented going back 100 years in time. It was fascinating hearing about the Celts’ daily lives. Genevieve

The chariot game was so realistic, that it felt like I was in a real battle. Jerome

The vaults were so scary. Fope

My favourite activity at the museum was when we built the Celts’ roundhouses and the Roman brick houses. I also enjoyed doing weaving and dressing up like a Roman and a Celt. The museum was so fun, I would definitely like to go there again soon. Emilia