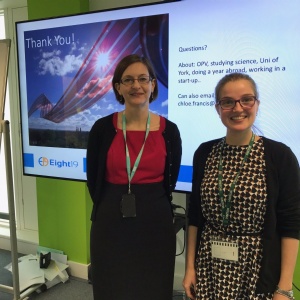 Alumna Chloe Francis (left 2012) came to talk to our 6th Form Science Society about her work as a scientist with Cambridge based start-up Eight19.

After studying for the IB at SPSFC, Chloe read Chemistry at University of York in a 4 year integrated Masters Degree, with her final year abroad in Heidelberg in Germany.

She is now working as a scientist for emerging start-up company Eight19 - named after the fact that it takes 8 minutes and 19 seconds for the sun to get to the surface of earth.

Chloe works with Organic solar cells - a bit similar to solar panels you might see in a field or on homes, and handed out some samples of the panels to look at. During her presentation, Chloe talked through the scientific process of OPV, and the fact that there is a lot to solar technology turning light into electricity, using OPV.

The market for these products is around $50bn for off grid market. 1.4bn people are without electricity, and companies light Eight19 want to be able to help people in Africa charge phones as they are cheap and light. They are now working to try and test their modules in African countries such as Uganda.

Research/development/testing for the next generation is a big area. Then the roll to roll process of manufacturing. Two teams. Encapsulation and lifetime/stability testing is Chloe's role in this small firm of about 12 people. They  also have an office robot!

Chloe also works one day a week at The Cavendish laboratory, part of Cambridge University, which eight19 also came out of. The role came through the Royal Society of Chemistry, initially as an intern which developed into a fuller role.