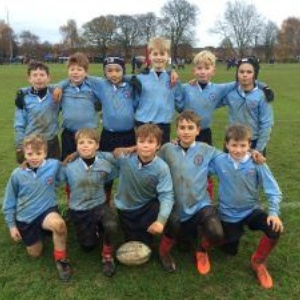 The U11 rugby team took part in the Midlands and North region, rugby qualifiers for the National schools rugby competition held at Wellingborough School.

On a chilly and damp afternoon the boys were aiming to finish in the top two of their group to ensure qualification to the finals in March.

Having been placed in a group with the hosts Wellingborough, St John's Northwood, Bedford Modern and the Paragon school from Bath, the standard of competition was extremely high.

All four matches were closely contested with some great attacking and defensive rugby played by all teams. A victory against Bedford by 1 try to 0, got us off to a good start. This was followed by the narrowest of defeats against Wellingborough of the same score line. Despite the defeat, the boys kept their heads high and battled out a 2 tries to 1 victory against St John's in their third match.

Our final game against the Paragon school, would determine which one of us alongside the hosts, would finish in the top two. An excellent first half saw us dominate territory but we were unable to cross the opponents try line. A nail biting second half saw all of the boys put their bodies on the line in both attack and defence and the game was won when Max Wiseman delivered a fantastic chip over the top for Olly Davis to run on to and score in the corner. A tense last minute, saw the boys tackle for their lives and hold on to a marvellous victory. This means the team have now qualified for the National finals being held in March in Epsom, Surrey.

It was an absolutely fantastic day of rugby and all of the boys should be extremely proud of their achievements.