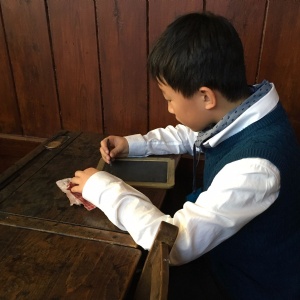 Junior School students spend a day in the shoes of children living in Victorian England.

On a beautiful sunny autumnal morning, Year 6 headed off to the village of Stibbington to spend the day experiencing Victorian school life.

Dressed in their Victorian outfits, they left their 2017 selves in St Eligius Street and assumed the persona of the Victorian child to whom they had already been introduced in their History lessons.

"I think it is fun to get to know your Victorian brothers and sisters.” Albert Eassom (Charles)

“It helps us to understand the life of Victorian children and how they lived.” Arthur Sutton (Pi)

Upon arrival, the Stibbington school teachers were waiting. The pupils were told that they would be immersed in Victorian times, focusing on the Stibbington children who were living in the village in 1896. 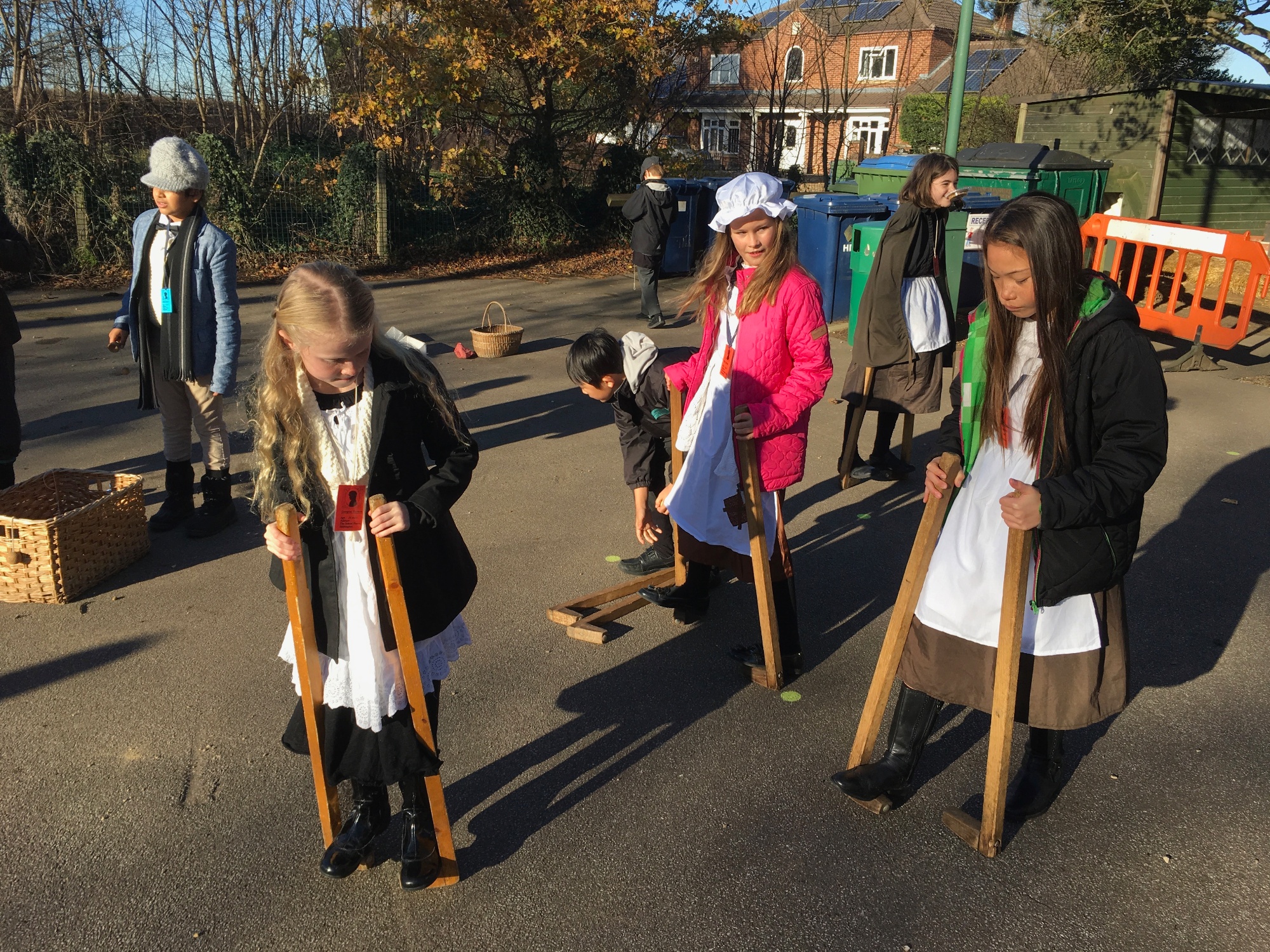 The pupils then went into two groups and one went straight to their first activity: a study of memorabilia and artefacts, from carpet beaters and butter churns to pottery hot water bottles and copper jelly moulds, all from the Victorian era. In their recent History lessons, Year 6 pupils have been learning about primary and secondary sources. It was a real treat for them to be able to handle some primary sources to find out more about Victorian life. Their task was to ask questions to learn more about the artefacts.

“What is it made of? Who might have used it? What was it used for?” Alice Eassom (Amelia D)

“It’s unusual and different to be able to play with Victorian toys.” Edith Smart (Millie)

“I feel honoured to be able to touch primary sources.” Alice Rowell (Ishita)

“It was surprising that Victorians used a carpet beater. The material it was made out of was really hard.” George Eassom (Leo) 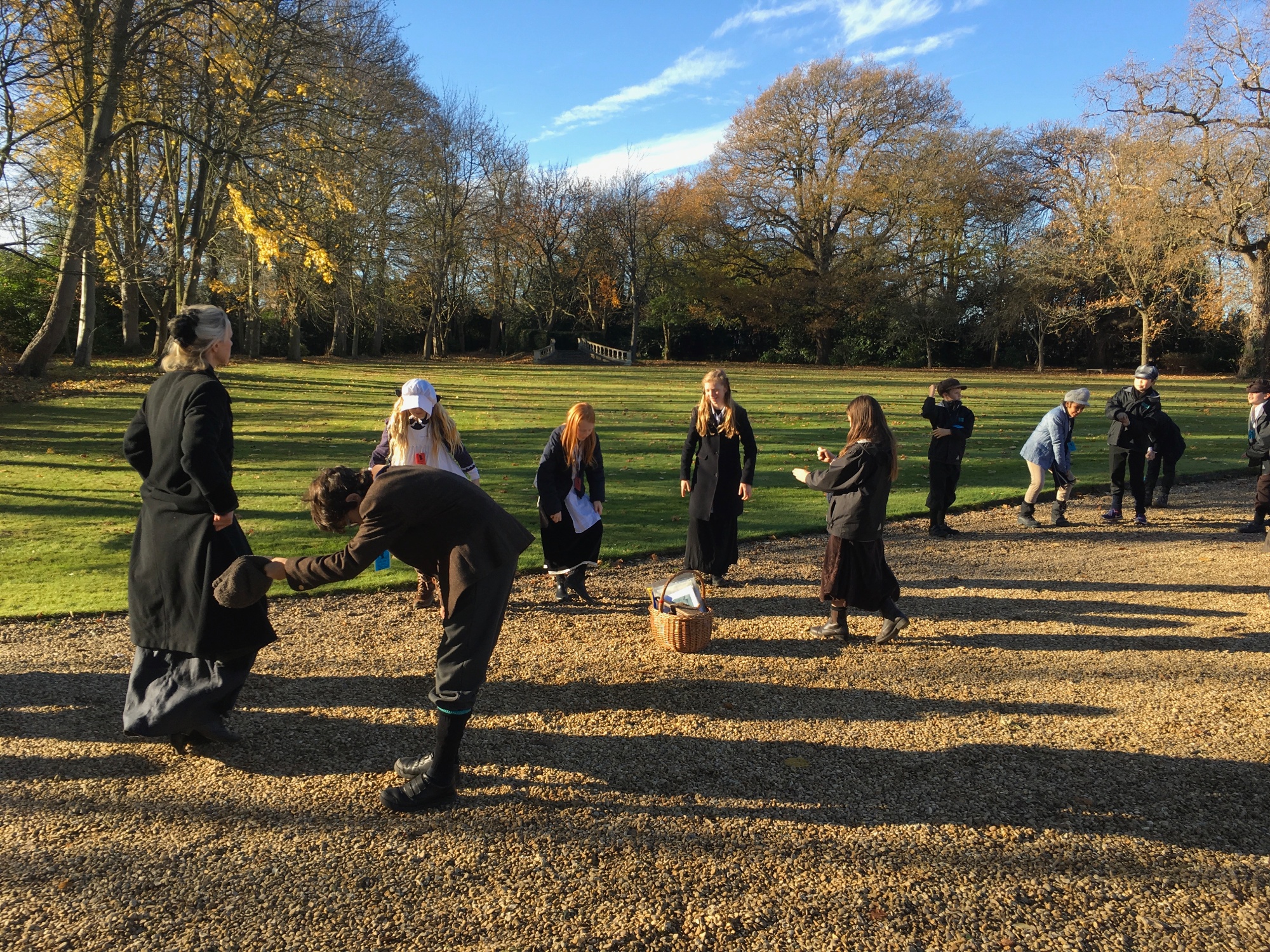 The group then went on a tour of the village and saw houses where some Victorian children lived. It was amazing to think that so many people from one family would have lived in such small houses. Being reflective thinkers, it made Year 6 appreciate, all the more, how lucky they are to be living today.

The group continued their walk through the village and came across Stonewell Cottage, where John Smart lived.

“It was really interesting to see Stonewell Cottage where I lived, caught typhoid from contaminated well water and survived.” John Smart (Sam)

Next it was on to the Manor House, where Captain Vipan and his wife had lived, and then the group set out for the church. Here, working as history detectives, Year 6 had a job to do - they had to search the graveyard of the church to see what other information they could acquire about the ancestors of the Stibbington children. Great care had to be taken as some of the weathered grave stones were very old and could easily be damaged. In a touching gesture of connection with those who rest in the graveyard, the pupils placed a sprig of rosemary on the family graves they found; a common Victorian tribute to the dead.

“My highlight of the walk was going to the graveyard and seeing the graves of the Stibbington ancestors.” Arthur Liquorish (Jonathan)

“The Vipan graves were polished granite and the other graves were made from local stone. This shows that the Vipans were rich and could afford stone from further away.” Ethel Woodward (Amelia F)

Back in the Centre, the second group was experiencing what it was like to go to school during the Victorian era. They met their Victorian teacher, Miss Flack, who was exceedingly strict and did not allow talking at any time. She quickly led the group into the austere classroom. 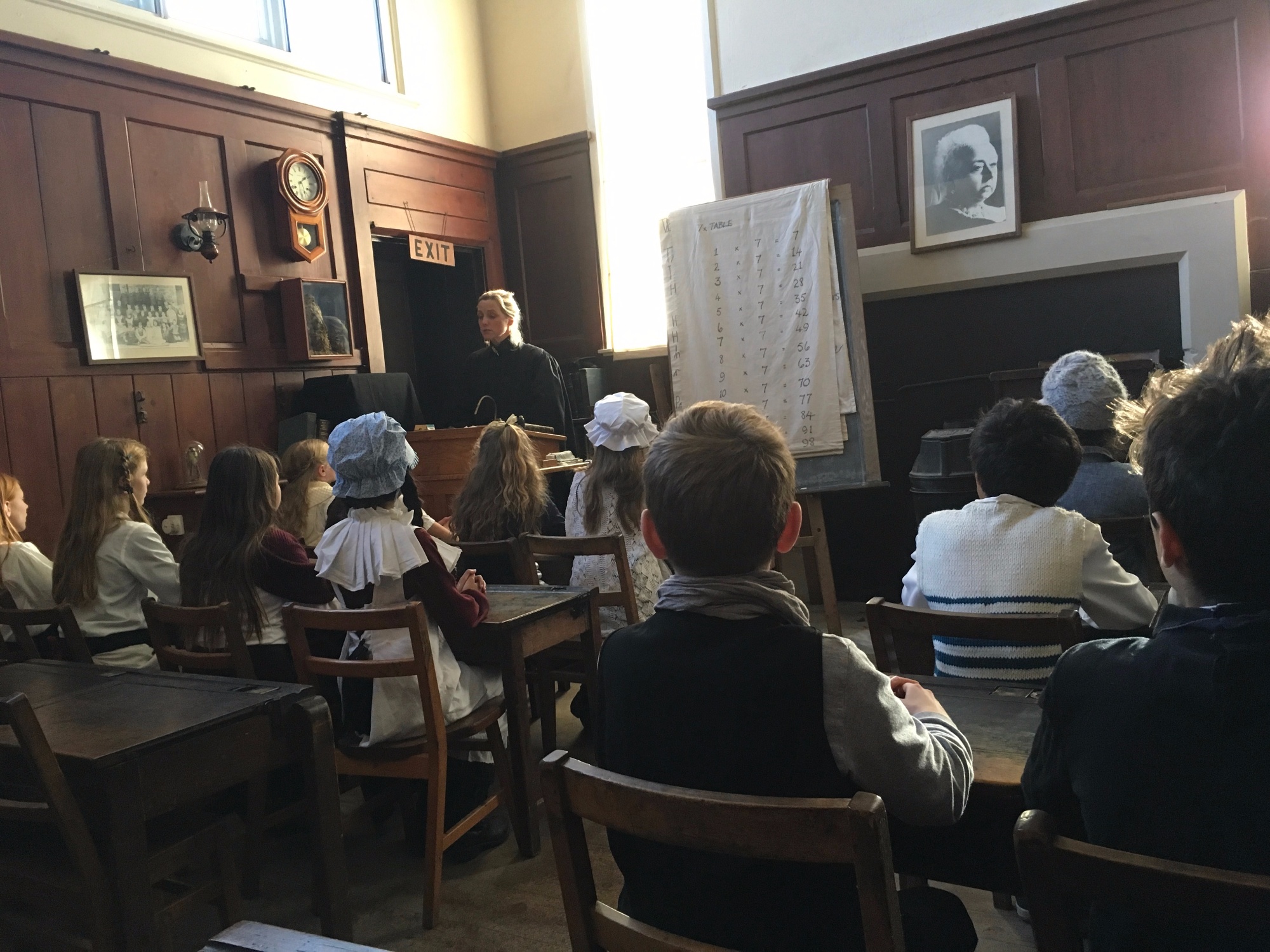 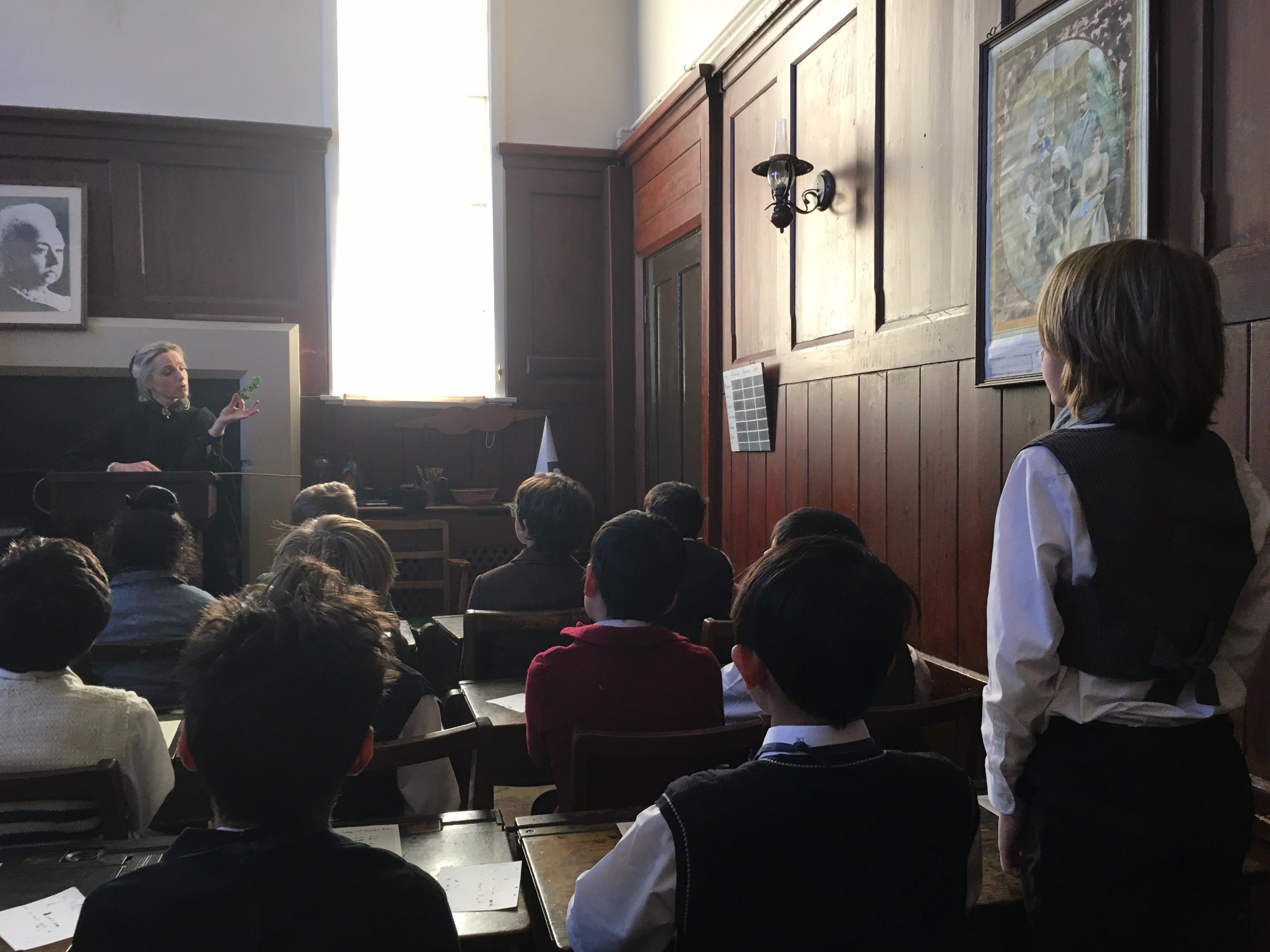 First, everyone had to stand behind their chairs and listen attentively to the teacher. Using the chalk and chalk board was a really interesting experience for the children as it is so different from anything that happens at school today.

What’s more, those poor children who wrote with their left hand, which was forbidden in Victorian times, were forced to use their right. Using the quills and ink pens really tested nerves as any smudge or blot resulted in severe punishment.

“If you did something well you were praised but if you did even a small thing wrong you got a really bad punishment.” George Woodward (Alexander)

“The Victorian classroom was inspiring and very different from a modern day one. I really enjoyed it even though I had to wear the dunce’s cap for getting a sum wrong.” Charles Sutton (Samuel)

All very different from life at the Junior School in 2017! 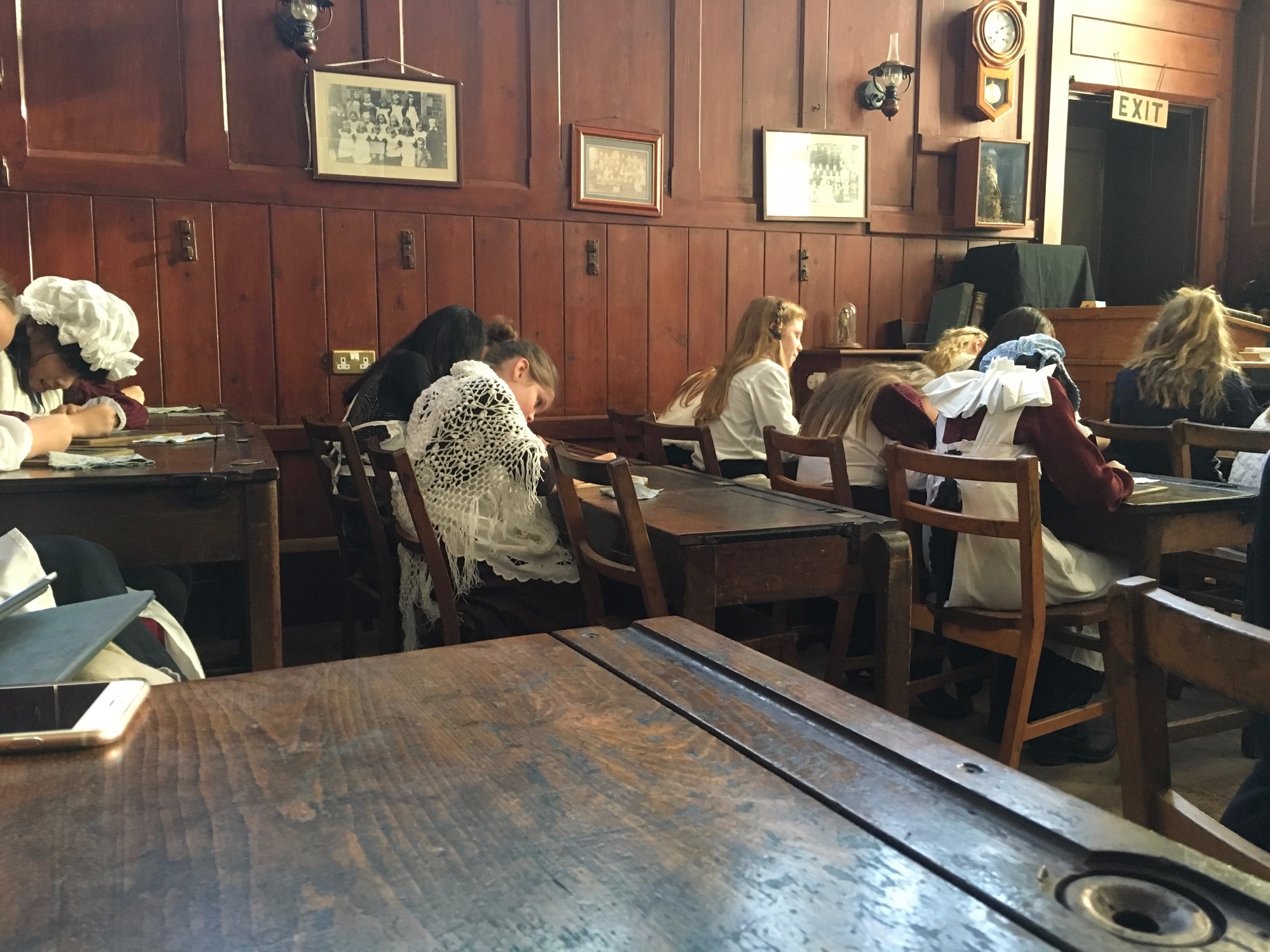 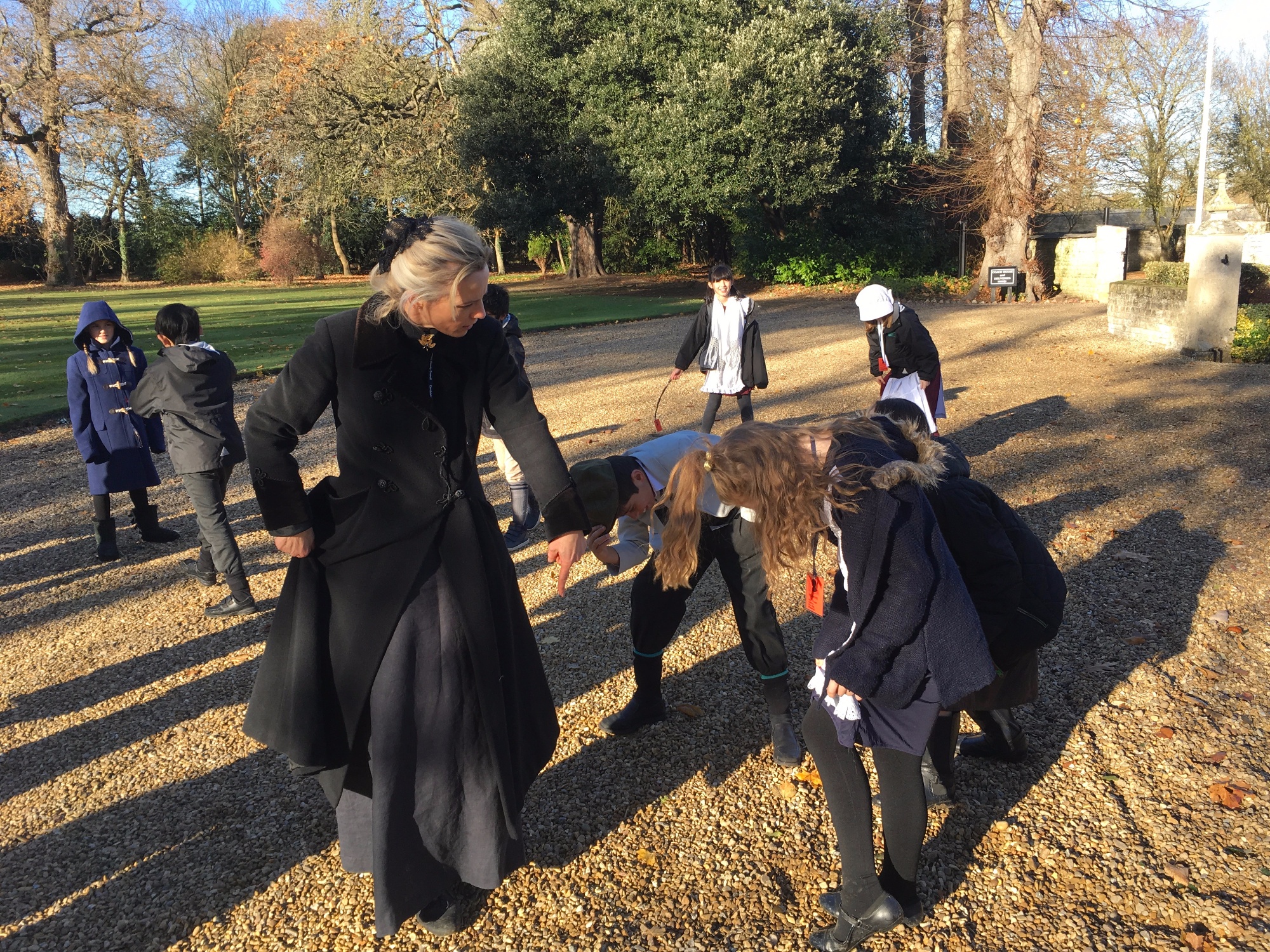 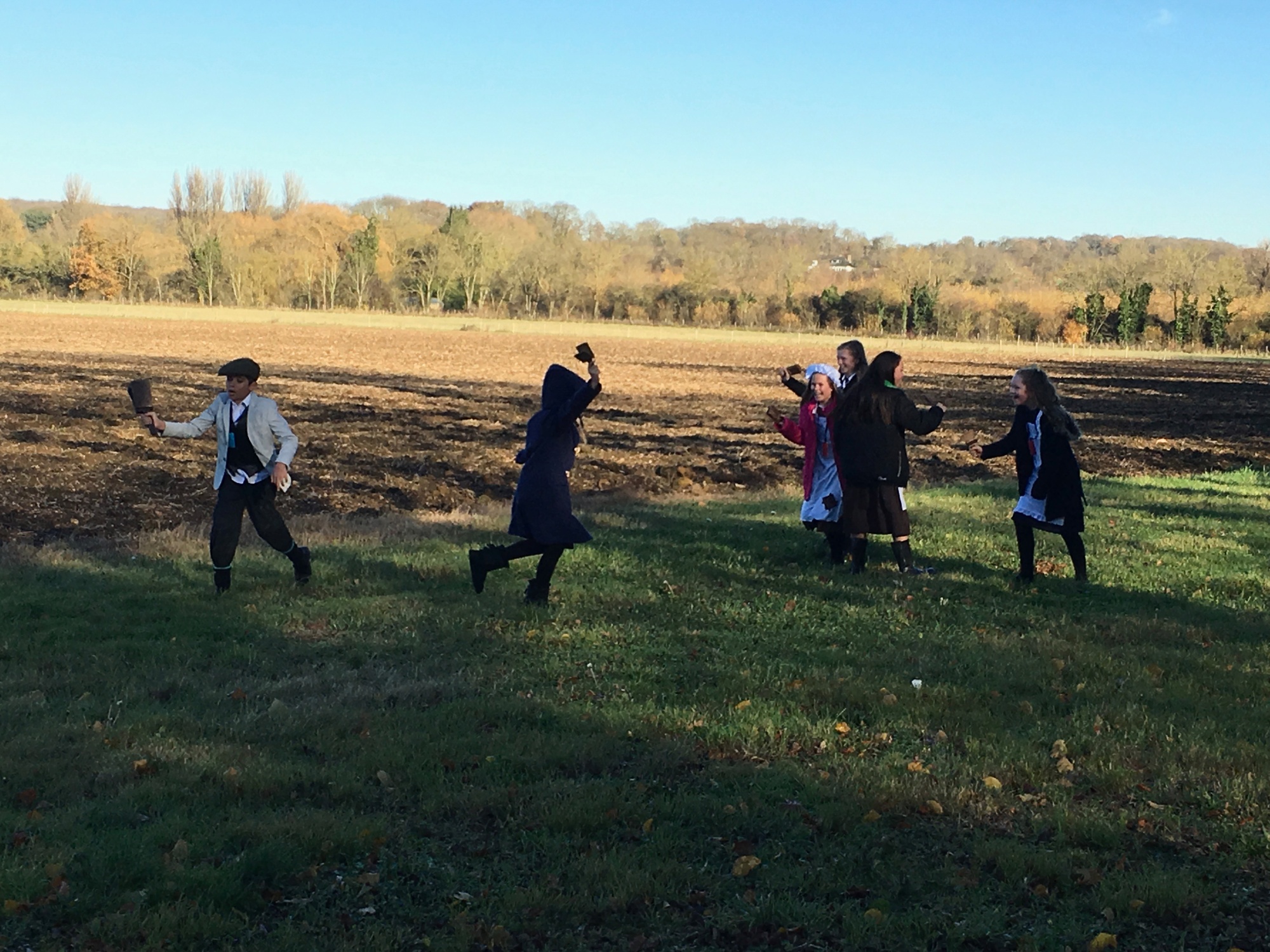