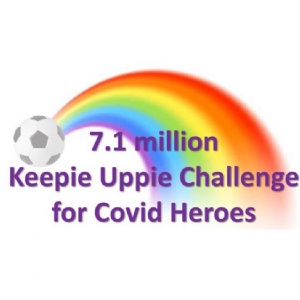 We are immensely proud of Year 5 pupil Imogen who has created a challenge to complete 7.1 million keepy-uppies, one for every key worker in the UK, and donating any funds raised to nine key worker charities. Inspired by Captain Tom Moore raising money for the NHS Imogen wanted to play her part in supporting the key workers who are working towards fighting Covid19.

Currently completing around 2000 keepy-uppies a day herself, Imogen is looking for people to help ‘donate’ keepy-uppies to help her reach her goal as well as donating to the charities. Cambridge United FC, where Imogen trains in their Youth Development Academy, have been donating their keepy-uppies and Imogen has been interviewed on BBC 5 Live and Heart radio to raise awareness of her challenge.

We want to support Imogen in every step of her fundraising appeal and in true Stephen Perse spirit, Head of Rosedale House Mr Hewlett has already sent Imogen his keepy-uppy donation that you can see here: