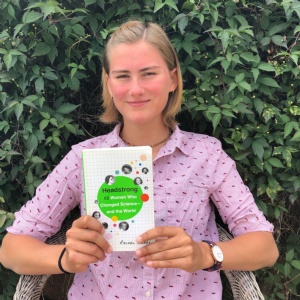 Well done to Year 13 student Almudena who has been shortlisted for the ‘Unsung Heroes of Science’ video competition held by Hertford College at the University of Oxford.

The competition asks entrants to create a video about a scientist that they feel deserves more recognition. Almudena chose to create her video about Russian mathematician Sofya Kovalevskaya. Not allowed an education in Russia, Sofya taught herself principles in mathematics by reading her father's notes. She became the first woman in Europe awarded a PHD in mathematics and then the first woman appointed a full professorship in Northern Europe.

Asked why she chose Sofya as her focus, Almudena said that “Whilst reading Rachel Swaby’s book Headstrong: 52 women who changed science and the world I came across Sofya and discovered many other wonderful stories of women who are barely known yet contributed invaluably to the modern world. Few people have ever heard of Annie Jump Cannon, a 19th century astronomer who classified almost 400,000 stars in her lifetime and still holds the record for manually classifying more stars in a lifetime than anyone else. Or Alice Hamilton, a bacteriologist whose work on toxic gases helped improve working conditions in American factories during the 1900s. Following extensive research, she also developed a reliable chemical test which helped prosecute drug dealers who exploited young children, helping to drive social change in deprived areas of America.

I chose to make my video on the Russian mathematician Sofya Kovalevskaya as I feel she is a pioneer in the field of mathematics who does not get the credit she deserves. She was extremely determined to pursue her passion, though as 19th century Russia did not permit women to study at university, she found a way to study abroad. By 1874, she achieved a PhD for her work, becoming the first woman in Europe to earn this title for mathematics. She went above and beyond, writing 3 dissertations for her doctorate (two on pure maths and one on astronomy) when only one paper was needed. A few years later, she was invited to become a professor for Stockholm University in Sweden. Again, she was the first woman in Europe to have this title.

Although Sofya lived to a mere 41 years of age, she helped shatter the glass ceiling in mathematics that had hindered so many women in the past. Although times have moved on in the 150 years since she lived, women are still drastically underrepresented in many areas of mathematics and science, something which I believe needs to be rectified, and quickly. I hope that by sharing Sofya’s remarkable story, I can inspire people to do their own research and find other women in science whose work they find interesting. Having rummaged through my A level physics textbook, while over 30 male scientists were mentioned, I could only find 3 women. Whether intentionally or by unconscious bias, women are routinely left out of history, their scientific contributions either credited to male research partners or forgotten entirely.”

Having been shortlisted, Almudena now awaits the online celebration on 30 June when the winners of the competition will be revealed. In addition to finding out the winners, they will also be giving an Audience Award for the most watched video by 29 June so support Almudena by clicking the video below and give it a watch!