Going off to space with Year 6 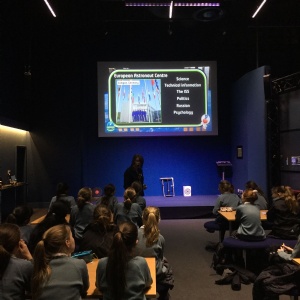 Space Week is part of the Year 6 extension and enrichment programme and is a combination of off-timetable activities, trips and hands-on experiments.

Over the past week, when in the classroom, Year 6 pupils were given a series of 'Space Missions' to complete. These involved: planning a trip to another planet; studying a table of statistical data about all the planets in our solar system and finding correlations between them; being inspired by photographs of space to produce a poem or short descriptive paragraph; and studying space exploration – from artificial satellites and space probes to telescopes and manned missions to space.

I enjoyed the challenge of trying to find correlations between the statistical data about all the planets. Romilly

I loved being creative during all the Space Missions. My particular favourite was planning a mission to a planet. I chose Saturn. Catherine

I enjoyed letting my imagination roam free when writing a poem about Saturn. Florence

This year's Space Week actually began with an enthralling visit on Monday 20th March to the National Space Centre in Leicester. First off, our pupils took part in a colour coded concentration test to ascertain whether they had some of the necessary skills needed to become an astronaut. During their workshop on astronauts, they were intrigued to discover all the different subjects that astronauts have to learn before they are allowed into space. These include: science, technical information, facts on the International Space Station (ISS), politics, Russian (the language of space), psychology and scuba diving! Did you know that there are many hazards in space such as no oxygen, intense heat and intense pressure, and even micro-meteorites that are a danger to astronauts? 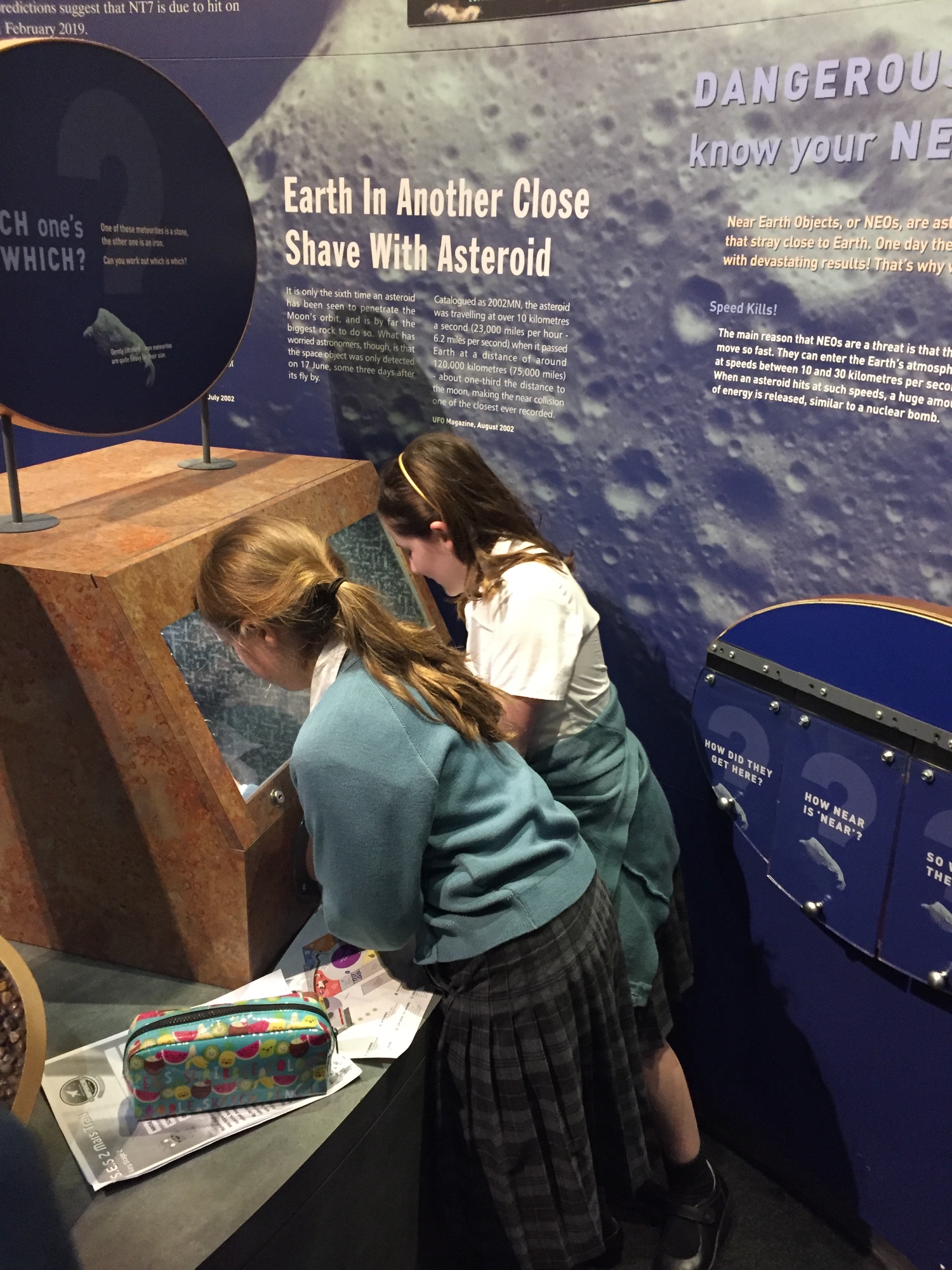 When Tim Peake visited the Centre a few months ago, he was filmed discussing the preparations required for EVAs (extra vehicular activities) or space walks. He explained that getting into a space suit can be quite a struggle and that the whole process takes about half an hour because space suits are made up of so many layers. First is the maximum absorption garment (MAG). This is followed by the cooling and ventilation unit, then the bladder layer (which is air tight and tear resistant), the Mylar insulation layers (which provide insulation) and, finally, there is a bullet-proof layer to protect astronauts from those micro-meteorites. Year 6 learnt a lot more in their workshop, including how to sleep in space, what Earth looks like from space, how water reacts in space and how to make a sandwich in space, taught to us (via pre-recorded video link) by the wonderful Commander Chris Hadfield.

I enjoyed finding out that astronauts have to wear MAGs under their spacesuits. These are nappies for grown-ups! Madeleine

The workshop was followed by a fascinating film in the planetarium about astronauts and then Year 6 spent time engaged and enjoying the interactive displays that make up the National Space Centre. This included the baked bean challenge which gave our pupils an idea of what the different gravitational fields are like on other planets. 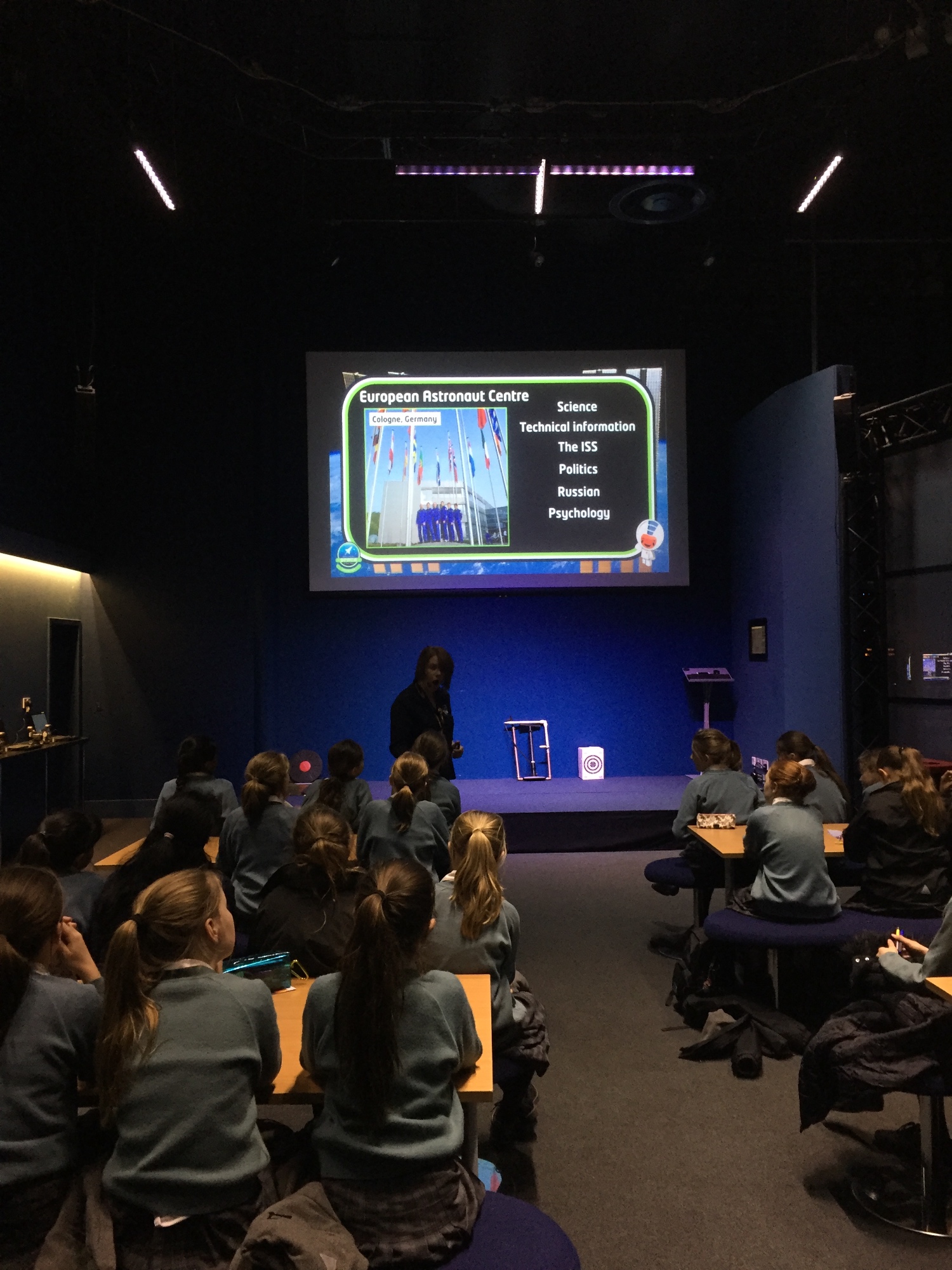 I didn't know that Jupiter had 67 moons. Thea

I was amazed to discover that you can fit all of the planets in our solar system between the Earth and our moon. Julia

The National Space Centre visit was followed, on Wednesday 22 March, by Year 6's second exciting trip of the week which was to the University of Cambridge's Mullard Radio Astronomy Observatory, located just outside Cambridge. The visit started with an inspiring talk by post-doctoral student, Matt Bothwell, on cosmology and what radio telescopes can tell us about the structure of the universe. The presentation and the beautiful images we were treated to were truly mind-blowing.

I never knew that space was so big. Now I feel tiny. Megan

If you use an optical telescope to look at a part of the cosmos the size of a quarter of my baby finger nail, you can see 10000 galaxies. That's amazing! Katherine

I was surprised to find out that there are stars even bigger than our sun. Molly

Year 6 were then taken on a tour of the extensive observatory site by the incredibly energetic and enthusiastic technician, Peter Doherty. They had the privilege of exploring the past, present and future of radio astronomy, including some of the historic telescopes used to make many of the fundamental discoveries in the field, like the awesome giant Merlin telescope, which is part of the very much active Jodrell Bank network and some of the cutting-edge technology being developed on the site. This will one day find its way to the high mountains of Chile or the dry plains of South Africa. 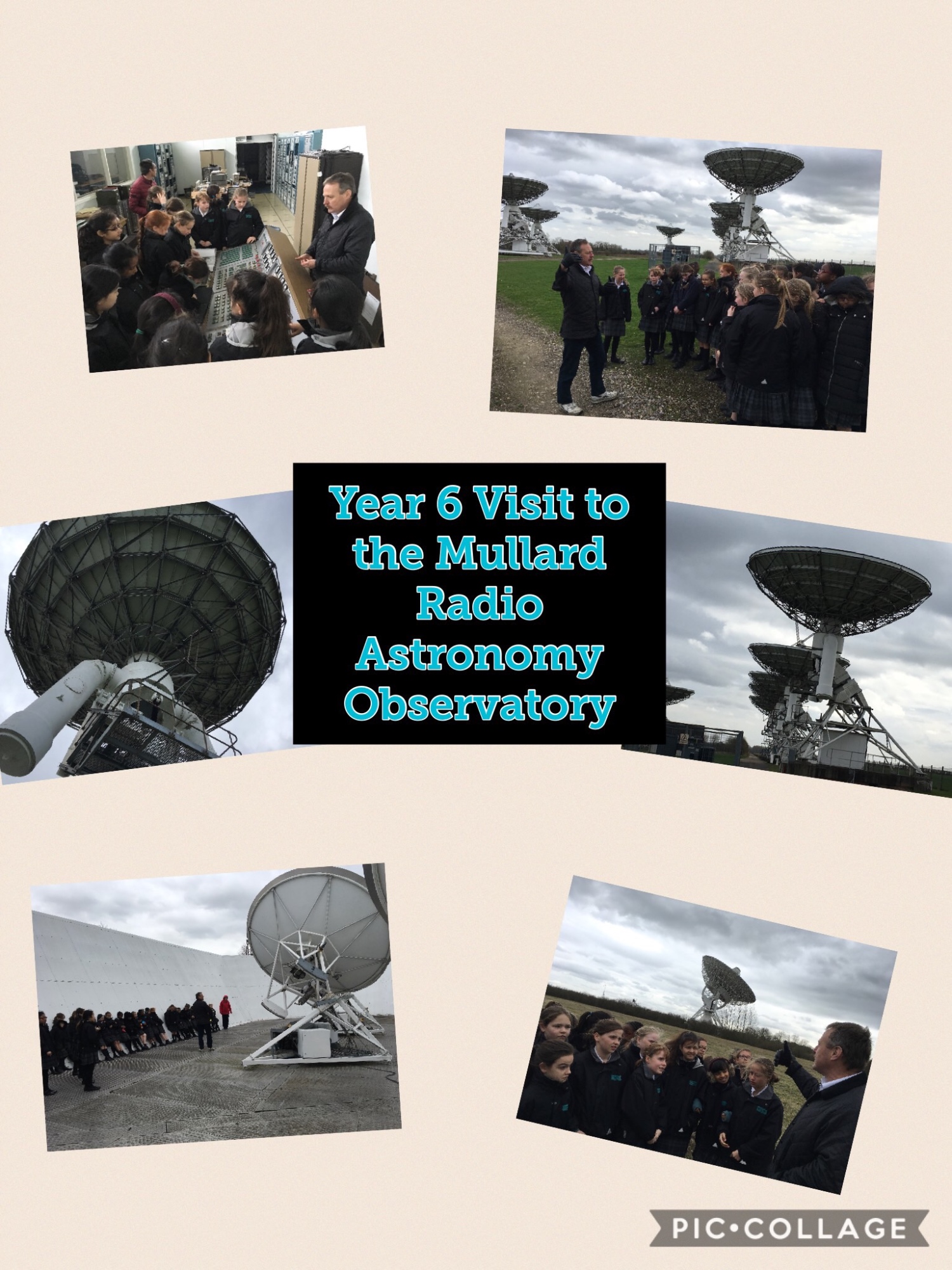 The sheer scale of the observatory site and the variety of other-worldly structures to be seen, made for a fascinating experience. The visit culminated with an opportunity for a rare glimpse of the old control room, packed with now-antique technology from earlier decades. The pupils were fascinated by the array of buttons on the control panel and asked lots of questions including, ‘What does this one do?’ They also gained a rare insight into the advance of technology by learning that a mobile phone now has a computing power which would once have required an entire roomful of the old hardware on display.

We are very grateful to the staff at the observatory for a fascinating and inspiring visit, which reminded us how truly fortunate we are to have such a world-class research facility on our doorstep.

Our final destination during Space Week was Latham Road for two sessions on rockets, the first of which involved Mr West launching two water-powered rockets. Year 6 pupils were asked to look at the effect of changing the amount of water in the rocket on the height and distance these rockets can travel. Both flew beautifully although the projection and flight path of the second was particularly impressive! The girls were then given the opportunity to launch their own paper, air-powered rockets, made earlier in the week, to see which designs can fly the furthest. Bravo Megan and Maya for having the most aerodynamic and far-flying rocket! 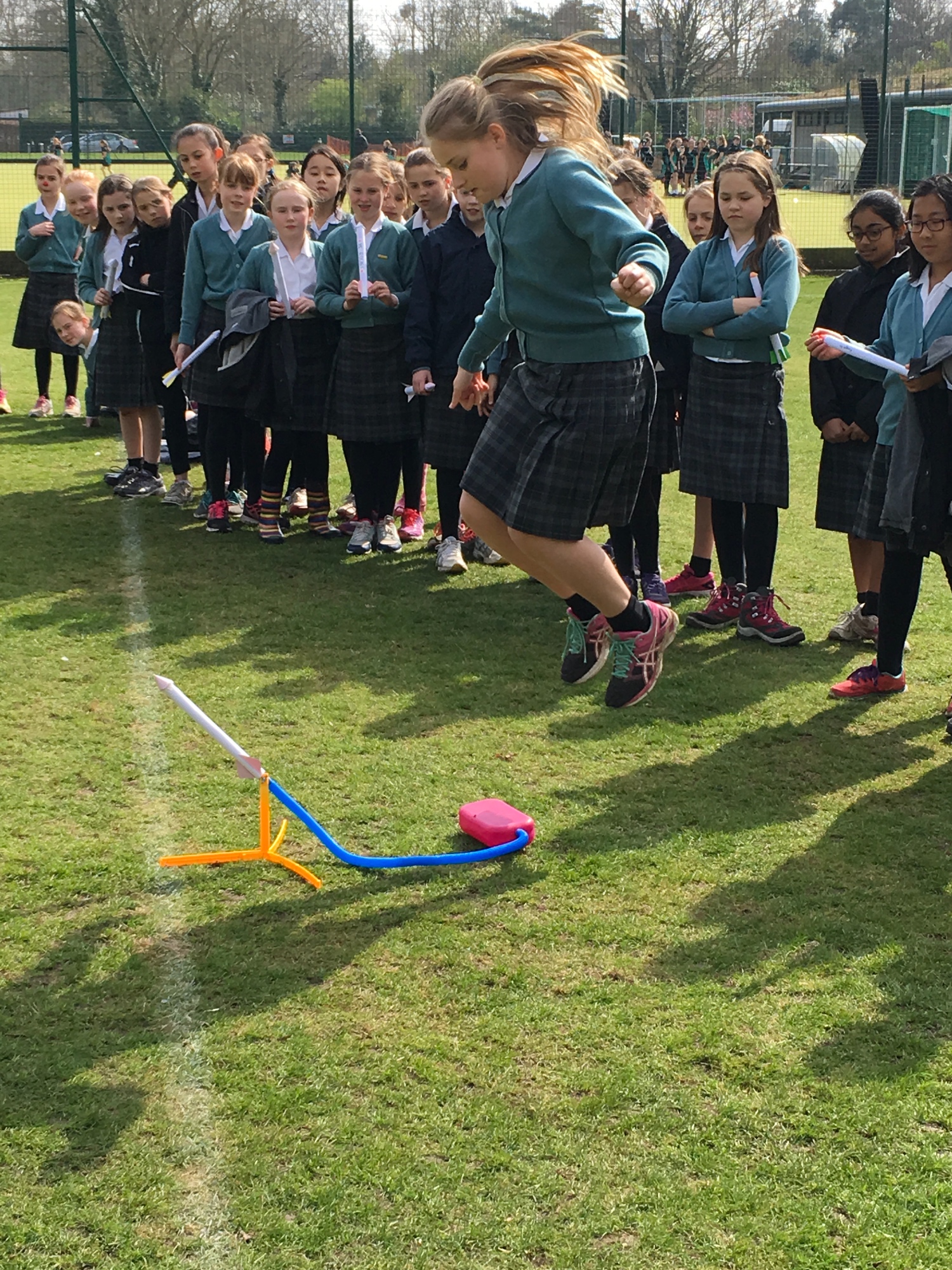 It was really interesting to discover that the rocket filled with more water travelled much further than the other one. Susie

I never knew that rocket science could be so simple! Lucy