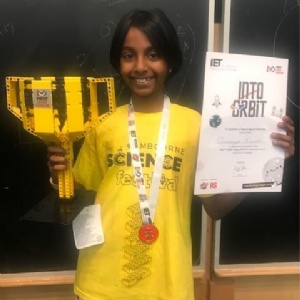 Shortly before the end of last term, we were excited to discover that Chinmayee, a Year 6 pupil in the Junior School, had been selected to join a team competing in the regional round of the First Lego League. This is an international STEM challenge for children aged 9-16 and involves building and programming robots using LEGO MINDSTORMS. The theme for 2018-19 is ‘Into Orbit’.
Chinmayee takes up the story:

I was in a team of ten keen and enthusiastic 10 year olds, with a coach to guide us. For six weeks we worked in small groups to program an EV3 robot to complete various ‘Missions’, such as carrying food to a Food Module, transferring astronauts to a Space Module and positioning a Satellite Dish. We had to make several adjustments to the program as we went along to make it as accurate as possible. In addition, we prepared a rap-song on ‘Avoiding a Meteor Strike to Earth’, as part of Lego League’s project challenge; this was well received by the judges! We met up to four times a week after school and on weekends in the run up to the competition, which was on 15 January at the Department of Engineering in Cambridge.

On the day, we were judged for showcasing our core Lego values, such as teamwork, inclusion and respectfulness and we were over the moon when our team, CERC, was declared the regional champions. The trophy was unique in that it was completely made out of Lego!

I thoroughly enjoyed participating in the Lego League Challenge, particularly the problem solving, as well as playing with and programming the robot, not to mention, meeting up with friends. I look forward to doing it all again when my team takes part in the next round!

Congratulations to Chinmayee and her team mates on winning this regional round and qualifying for the UK and Ireland Final, which is being held in Bristol on 16 February. 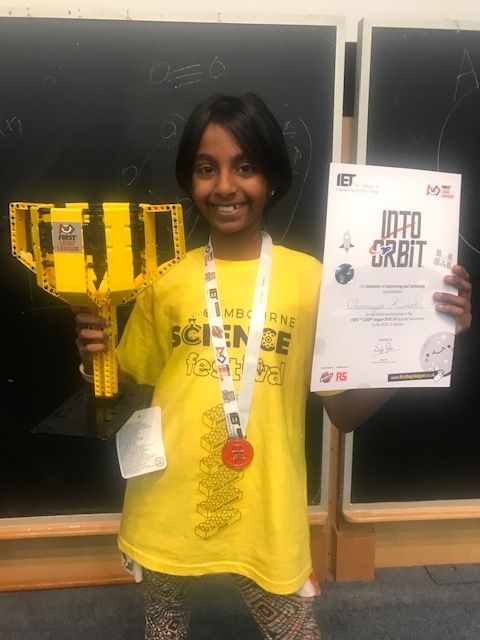